This fall has been really busy, and it isn't over yet!

As I am writing this post, we are less than one week away from the first Norwegian Lync Day, where I will hold a presentation on Lync backup and restore. Ståle Hansen and Knowledge Factory has done a great job to gather highly qualified MVP's and speakers for a day packed with great sessions around our favorite topic: Lync! For more information and/or signup, go to: http://lyncday.no/ 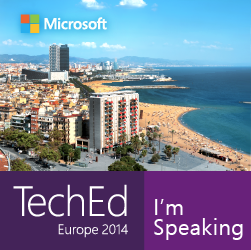 When Lyncday is over, it will be just two more weeks until most of us head for Barcelona, and TechedEU. Here I'll be holding a similar presentation around the same topic (Backup and restore / http://teeu2014.eventpoint.com/speaker/details/c27e77c2-7d22-e411-9bad-00155d5066d7).

As a preparation for these to presentations I have gone over my backup script for Lync 2013, and I am planning a major release change with a few new options and a couple of bugfixes. If you do have a bug you want to report in the existing version or have a suggestion for a new feature. Please drop me a line. It's not to late to get your request included.

Here's a sneak peak on some upcoming changes: